In Memory of
Harry
Mulak
2021
Click above to light a memorial candle. 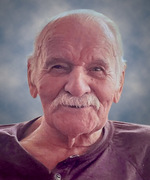 With cherished memories to comfort us and hearts grateful for a life well lived, the family of Harry Mulak formerly of Redwater AB announces his peaceful passing at the age of 88 years.

Harry was born in Radway, AB on Sept 01, 1932 to parents, Joseph and Kataryna Mulak. Harry enjoyed growing up on the family farm near Waskatenau and attended the Clodford country school until 1947 where he graduated with a grade nine diploma. Harry enjoyed baseball and played for the Clodford team.

Harry discontinued his schooling because help was needed on the family farm especially with the household and farm chores. When his dad, Joseph passed in 1965, he and his brother Peter continued with the farming operation until 1975 when other opportunities called Peter away leaving Harry to remain. Harry worked hard and seemed to enjoy the simple life. He had cattle, pigs, chickens, and of course grain farming.

In 1975, Harry met his wife Elsie while recovering at the Redwater hospital from the flu and they were married the following year in 1976, just three months prior to his mom’s passing.

In 1993, Harry retired and moved to Redwater where he remained very active in the community. He continued volunteering and caretaking at the Redwater Greek Orthodox Church and Derrick Hall, calling Bingo at the lodge, delivering pizzas for the Burger Baron, and helped pinch many pierogi for the church; he was a good pincher!
On a hot summer day, you could be sure to find Harry in his front yard relaxing in his lounge chair under the shade of the large mountain ash with a cold beer in his hand, CFCW playing on the radio, watching the cars and people go by. Harry very seldom missed watching Wheel of Fortune, Jeopardy, and America’s Funniest Home Videos. Harry did not have any hobbies but did garden a bit and enjoyed planting flowers.

Harry loved spending time with his granddaughter, Amanda Stratichuk (Mulak) born in 1989, and grandson, Damien Hicks born in 1992. Some of Amanda’s fondest childhood memories with grandpa were going with him to deliver pizzas, stacking chairs at the Derrick Hall, picking pop cans, and going every year to the fire hall to visit with Santa. Amanda noted grandpa often found practical ways to spend time together but the moments were priceless. Damien was grandpa’s little buddy; they spent many a weekend happily hanging out. There was trips to the video store; they often enjoyed pizza and ice-cream from the Burger Baron, car rides to Walmart for new Pokémon cards, playing at McDonalds in the playplace, and grandpa had a soft spot when Damien was looking for a sugary treat

In 2016 Harry welcomed his first great-granddaughter, Marley Stratichuk and in 2017, his first great-grandson, Oliver. I think he was surprised how much these two filled his heart with love and happiness. They had their papa and he was putty in their hands. Harry’s greatest joy was spending time with his grandkids and great-grandkids. Harry was not able to do the thigs he could with Amanda and Damien but it didn’t seem to matter; just visiting him, playing peek-a boo, barbeque lunches at the acreage or celebrating holidays meant so much to Harry, Marley, and Oliver and they sure loved being with their Papa.
When Amanda asked Marley what her time was like with Papa she said “Hakuna Matata” then she burst into song singing, “it means no worries, for the rest of your days", it’s our problem-fee philosophy. I think that sums up how we all felt enjoying time with him.

In 2015, Harry’s dementia began progressing but he made it quite clear he was not moving into no 'damn old folks home' so Kyla moved in to assist with the every day tasks. It was a difficult time as we adjusted to living together, but in the end each of us were forever grateful for the time we shared and we each learned some valuable life lessons. In 2018 Harry transferred to higher-level care in Smoky Lake where he had the nurses wrapped around his finger and in return, Harry used his sense of humour to keep them laughing.

Harry had a love hate relationship having his grand daughter Amanda working in his centre. He loved and looked forward to seeing Amanda, however due to his foolish pride it meant he could not get out of his baths, taking his medications, nor get dressed.

In 2021 Harry transferred to Auxiliary care where sadly his time was short but the nurses continued to make each of his days the best they could.

The family would like to express their heartfelt thanks to Dr. Hendrik Lourens, Dr. Stephen Raubenheimer, the nursing staff the Smoky Lake Auxiliary and the Bar-V-Nook Lodge for their compassionate care.