In Memory of
Duane Andrew
Lamash
2021
Click above to light a memorial candle. 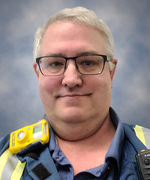 We are saddened to announce the passing of Duane Lamash, of Fort Saskatchewan, on Wednesday, June 2, 2021 at the age of 55 years.

Duane was born in Lamont, AB on July 27, 1965 to parents Peter and Sonia Lamash. He enjoyed growing up on the family farm near St. Michael helping with chores, playing with relatives, raising livestock, and driving heavy equipment.

As a teenager, one of Duane’s proudest achievements was sporting a full moustache at the age of 15 and sneaking into the local bars without question. During high school, Duane was an accomplished volleyball player, having won many tournaments alongside his classmates. After graduating, Duane studied at NAIT and worked in road construction, before settling on a career in the oil and gas sector as an NDT inspector.

While working in Rocky Mountain House, he met his future wife Heather and married her on July 10, 1993 after two years of dating. Soon after, Duane and Heather settled down in Fort Saskatchewan, buying a home and raising their sons Andrew (born in 1995) and Jordan (born in 1998).
Duane was renowned for his great cooking and barbecuing skills, as evidenced by the many people he happily fed over the years. He also enjoyed camping with friends, up-keeping his yard, attending sporting events, and repairing his vehicles.

Duane took great pride in his job at Shell Scotford refinery, where he worked for over 10 years up until his death. Those who were closest with Duane knew he would always spend extra time finishing a task if it meant doing it the right way.

A viewing will be held Tuesday, June 8 from 4:30 – 8:30pm at Park Memorial Funeral Home, 9709 111 Ave Edmonton, AB, followed by a private family funeral on Wednesday, June 9 at 11:00am. Those wishing to view the service may do so by selecting webcasting from the menu on this page.

The family wishes to extend their gratitude to all those who have reached out to them during this difficult time.

In lieu of flowers, donations may be made to the Stollery Children’s Hospital.

Duane loved his family very much and was always there when they needed a hand. We will miss him dearly.

Don’t think of him as gone away –
his journey’s just begun
life holds so many facets –
this earth is only one.

Just think of him as resting
from the sorrows and the tears
in a place of warmth and comfort
where there are no days and years.

Think how he must be wishing
that we could know today
how nothing but our sadness
can really pass away.

And think of him as living
in the hearts of those he touched…
for nothing loved is ever lost
and he was loved so much!