In Memory of
Sister Martha Mary
Zulyniak, SSMI
2016
Click above to light a memorial candle. 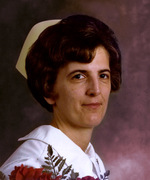 Mary was born in Willowbrook, Saskatchewan near Yorkton, to a loving and devoted Ukrainian Catholic family. She attended Sacred Heart Academy where she encountered the Sisters. Responding to Christ’s call in 1958, she entered the Novitiate of SSMI in Ancaster, Ontario, where she took the name Martha. She made First Profession of Vows in 1961 and Final Profession in 1966.
Sister Martha’s first mission years in Saskatoon, Yorkton, Ancaster, and Toronto were preparing meals for the Sisters and boarders. From 1975 she served in the health care mission as a licensed Practical Nurse in the Pastoral Care in the Sisters Servants Person Care Homes in Manitoba at Dauphin and Winnipeg, in Alberta at their hospitals in Mundare and Willingdon. She has served as Superior at the Sisters’ Seniors’ Home in Mundare since 1999.